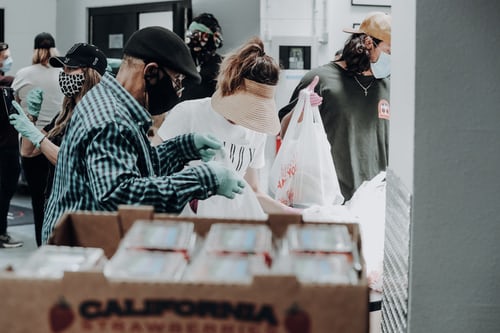 The Food in a Pandemic report, commissioned by the FSA and produced by Demos as part of Renew Normal: The People’s Commission on Life after Covid, looks to understand how a new food environment created during the pandemic has impacted the public’s behaviours and preferences. The research included: a nationally representative survey of 10,069 UK adults, a nationally representative online deliberative method called Polis with 1,006 UK respondents, a series of four deliberative workshops, and an open access survey of 911 adults.

Key findings on the public’s experience during the pandemic

Findings also show there is a public appetite for the government to take action to help feed those without the means to feed themselves. People also tend to be more supportive of preventative actions for food insecurity, such as ensuring well-paid jobs are available to all. Just under two thirds (63%) agreed in the Polis that ‘it is the government’s responsibility to make sure no-one goes hungry’.

It’s reported a significant proportion of the population have bought food more locally or grown more food during the pandemic, reflecting a wider move towards individual self-sufficiency. Many of those who have made this move expect it to continue after the pandemic.

78% of those surveyed supported the UK keeping its current food quality standards, even if food is more expensive and less competitive in the global market. A similar proportion (82%) also supported maintaining the UK’s current animal welfare standards, when presented with the same trade-off against prices and competitiveness.

There has been a complex shift in people’s diets during Covid-19, with more home cooking. Although a third (32%) of respondents in the poll reported eating more healthy main meals, a third (33%) ate more unhealthy snacks.

Some of the restrictions and public health advice, such as stay at home, might have encouraged more healthy eating. Those who have cooked more or eaten healthier main meals tend to expect this change to continue. However, this is likely to be somewhat dependent on the other changes, such as continued flexible working.

You need to be a member of iKANN to add comments!

This reply was deleted.